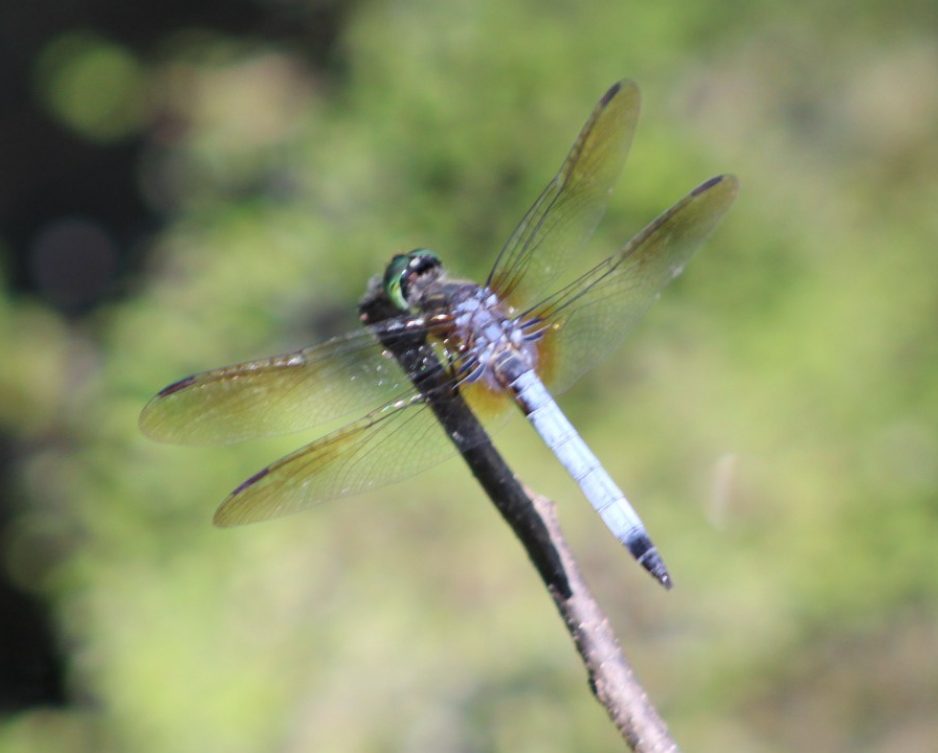 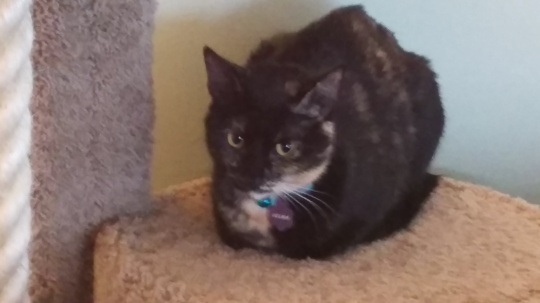 After not having a cat for several years, this past March our family adopted a cat, Velma Kelly.  We kept the name that the animal rescue place had given her (she and her siblings were named after characters in the musical Chicago) and it seemed to suit her.  I’m not sure exactly what made me decide to get a cat that chilly day.  Erin and I had worked at a Girl Scout Cookie Booth in front of the Petsmart store, and when we were finished, we decided to take a look at the dogs and cats they have up for adoption.

When I first saw her in the bottom cat cage, her markings caught my eye.  I thought she was a beautiful little kitty.  I started talking to the woman from Heartland Animal Shelter about her, quickly dismissing the notion we’d ever own a cat again.  Several years ago we had taken in Darrell’s grandmother’s cats when she moved in with his parents, and while I loved them and all their silly feline-ways, I don’t think Darrell ever really connected with them.  Cindy Lou, who was such a sweet, laid-back cat, lived to be over 21 years old.

“We have two crazy dogs at home,” I told the lady from Heartland.  “I’d feel sorry for any cat we’d bring back to the house.”

Well, as it turned out, she was this cat’s foster mom, and they had dogs, too.  “Look,” she said, pulling out her phone.  And there was Ms. Velma, snuggled between two dogs on the couch.  The wheels began to turn.  Could this little kitty be the newest addition to our home?

I went on to explain how our two knuckleheads (my affectionate nickname for the collective Chester and Grendel), were awesome at our house, snuggling with us on the couch, fun to play with and overall great, loyal companions, but lacked social skills with other dogs, and sometimes people.

“Velma loves to sit on your lap and watch TV,” she told me.

Hmmm…I love to watch TV with snuggly pets! I thought to myself.  Visions of me planted on the couch surrounded by my furry friends started to form in my mind.  It was my version of Snow White and her birds and bunnies doing the housework—minus the effort chores take, of course.  “Can we see her?”  I asked.  After bringing up the dogs to make sure they’d be compatible and convincing my husband she’d be perfect for us, two hours and about $250 in cat paraphernalia later, we had ourselves a cat. 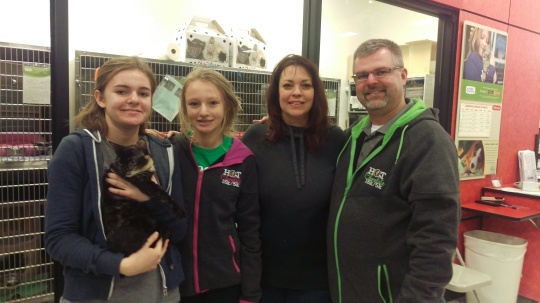 Our family, minus Tyler, on adoption day.

Sadly, my Snow White fantasy remains unfulfilled.  I have yet to even get her to stay in the same room with me, let alone sit on my lap.  Velma is quite the Fraidy Cat.

I would say that it’s not without good reason.  The dogs, though not vicious towards her, are a little too curious for her liking—Grendel especially.  He watches her perched upon her cat tree in the family room and whines.  And he never misses the opportunity to give her a good chasing when he can.  To give you a visual, it’s all toenails for brakes across the slick floor followed by ass over teacups. 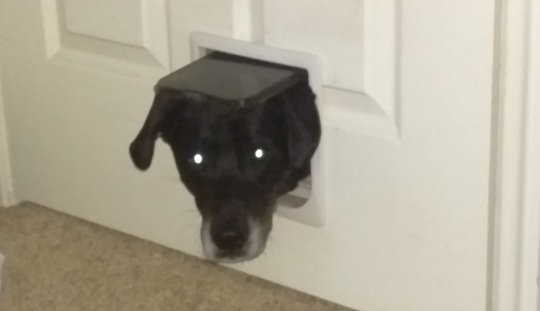 This is a regular view from within her sanctuary (Erin’s room) for Velma. They say curiosity killed the cat…but what about the dog? She doesn’t even scratch his nose with her claws.

To give her sanctuary, we put in a kitty cat door opening into Erin’s room.  Erin is her human.  For the most part, she’s the one who feeds her, cleans out the kitty litter and as a result, gets all the snuggles I crave.  It’s very heartwarming to see Velma adore both Erin and Emily.  She lets them rub her belly and sometimes carry her around with them.  I’ve tried to be friends with Velma, but still she fears me.  It may be because the first two or three days she was home I was tasked with grabbing her out from behind any furniture, or it may be because she associates me with the dogs.  In any event, even though every time I reach my hand out to her, purposely giving her treats in my outstretched hand, she runs away as if I had just dumped boiling oil on her.

It reminds me of a story I heard a long time ago about a non-believer and some birds.  I searched for it and found it to be a Paul Harvey story.  The story goes that there was a man who was a good person, but found the Christmas story of baby Jesus in the manger hard to swallow, so he opted to not attend Christmas Eve service with the rest of his family.  After his family left, some birds had hit his window trying to get in during the snow storm.  He wanted to help them, but after various ways of trying to get them to safety, realized they were afraid of him.  The thought occurred to him that if he were a bird, they might be more willing to follow him and let him show them the way.  And he had his lightbulb moment of truly understanding the Christmas story.

I’m not sure Velma would like me any better if I were a cat, but I wish she would at least see that I only want her to be a happy part of our family.  Erin was gone this past week on a Mission Trip with Youth Group and now is in Florida with our friends, so I’ve been trying to take advantage of Velma’s loneliness.  The first time we took her to the vet for a checkup after we brought her home, the vet’s office bribed her with baby food.  Since she seemed to like it, this past week both Darrell and I have been trying to coax her to us with little spoonfuls of baby food chicken and gravy. When I feed her, I stroke her silky fur and tell her what a sweet kitty she is.  I play laser pointer with her and let her chase it until she’s worn out.  I sit on Erin’s bed and dangle the kitty fishing pole toy in front of her face to let her bat at the ribbons.  I keep the dogs at bay. 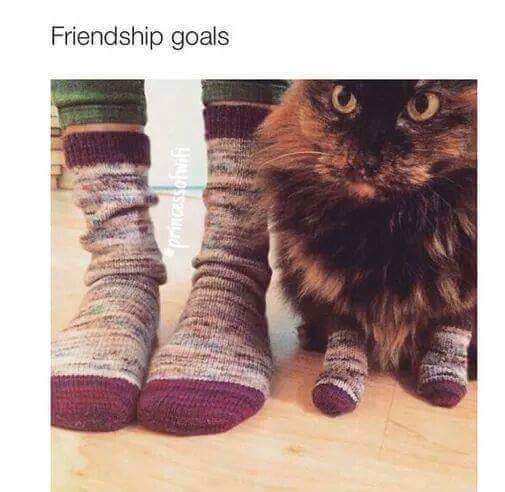 Velma’s obvious fear of me and other benevolent people has held her back from moments she might enjoy if she would just relax and not be afraid.  It’s frustrating, but in some ways I can relate a little.  While I’ve never run from the offer of tasty snacks, I have run from opportunities because of a fear of the unknown.  I am guilty of living in my comfort zone because stepping out of it brings the risk of failing and having to say, “That was a mistake.” Who wants to do that?  Or what can be even scarier at times—what if it is successful and I have to keep it up?

Fear has its place.  It keeps us from holding umbrellas on hilltops under trees in lightning storms and hanging out in dark alleys with wads of cash hanging out of our pockets.  But it can also hold us back from our potential—what we were meant to be.

I still haven’t won her over, but I think Velma’s at least accepting me as an Erin substitute this week.  With cats, I’ve learned not to try too hard—they are definitely the ones that like to play hard to get.  Friends have given me hope by saying that they’ve had cats that took over a year to get comfortable in their homes.  While I’ve resigned myself to the fact that she may not be sitting down on my lap and watching TV any time soon, I’m not convinced she won’t ever enjoy hanging out with us in some capacity as her trust in us grows.  Until then, I’ll celebrate the little victories with her like the few times she’ll sit on the stairs and watch me type on the computer.  Who knows?  Someday my Snow White moment with my furry friends may come true. 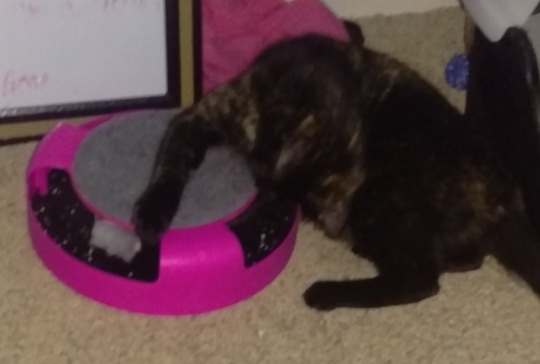 Update:  I wrote this three days ago, but was waiting to do a final edit before I posted it.  In fact, it was still pulled up on my screen.  Velma must have read it and felt sorry.  Last night, I decided to read my book in Erin’s room to spend more quality time with the cat.  I didn’t get much reading done, because the game turned into her getting in between me and the book.  So I stopped trying to read and just scratched her behind her ears.  Long story short, I ended up sleeping in Erin’s room to keep the cat company and she is now my best friend.  I was tired this morning after Velma pawed and purred in my ear all night, but I had a thought that maybe the lesson here wasn’t just about fear holding us back.  Maybe it’s about meeting others who are unsure or timid wherever they are, including within their comfort zone, so that trust can become a part of the equation.  But I suppose that’s a whole other post. 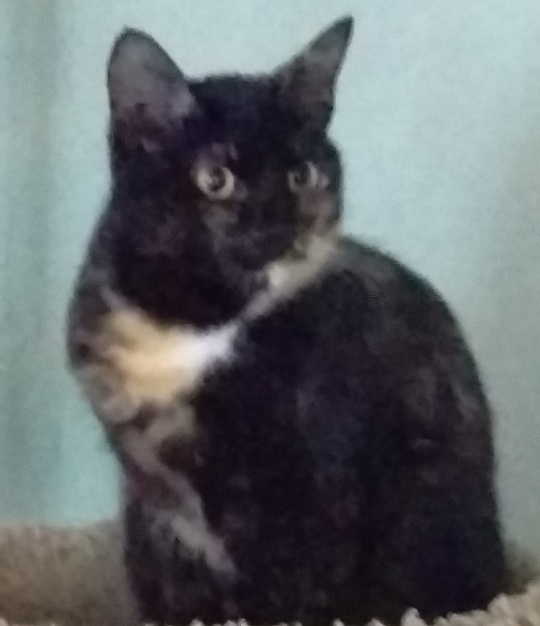